Theatre is officially back…

After eighteen months of predominantly watching productions online, we are so pleased to announce that we will once again be returning to standard programming. This Autumn, we are ready to dazzle audiences with a superb season of shows that focus on a moment in which two strangers, or a collection of old friends in some cases, come face to face on stage. Starring acclaimed actors including Dame Siân Phillips, Oliver Ford Davies and Michael Pennington, this season is not to be missed. Book tickets now before prices rise to avoid disappointment.

The Encounters Season will include Ben Brown’s A Splinter of Ice, Samuel Beckett’s Footfalls & Rockaby and William Shakespeare’s The Tempest. 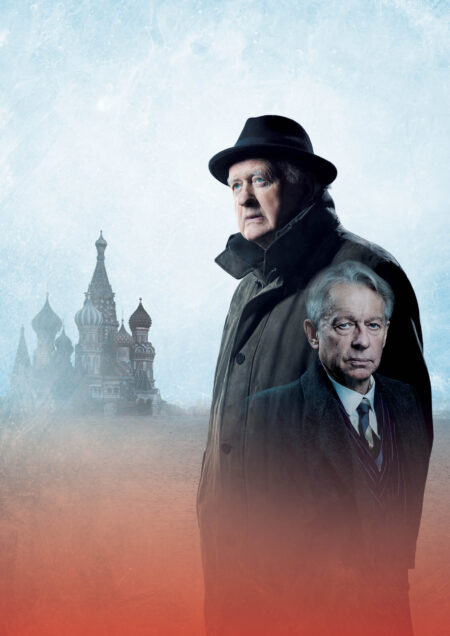 Directed by Alan Strachan with Alastair Whatley, Original Theatre’s A Splinter of Ice is a spy drama that will leave you on the edge of your seat. Set at the start of the Cold War, Olivier Award winner Oliver Ford Davies, recognised for his role in HBO’s Game of Thrones, and Stephen Boxer, most recently seen playing Denis Thatcher in Netflix’s The Crown, star as Graham Greene and Kim Philby respectively. As the pair raise their vodka glasses to past memories, the audience are forced to question the details of the historic betrayal in this co-production with Original Theatre. How much did Greene know about Philby’s ways? And who is listening in the room next door…?

Following Beckett’s All That Fall and the Beckett Triple Bill, Jermyn Street Theatre presents theatre legend Siân Phillips in a must-see double bill.
Joined by Charlotte Emmerson and directed by Richard Beecham, these rarely performed masterpieces are set to strikingly explore age, memory, and the passing of time. Make sure that you are in the audience when the rocking chair starts to creak…this is unmissable live theatre!

The season closes with a spectacle that we had expected to see on our stage almost eighteen months ago. Now, from 25 November, The Tempest returns with Artistic Director Tom Littler reuniting the original cast for this Shakespearean classic. Audiences will finally be spellbound by Michael Pennington as he takes on the role of Prospero and conjures up one of the most memorable storms in theatre history.

Book tickets now for an early Christmas treat and go on an unforgettable magical voyage.

It’s easy to book tickets to The Encounters Season! Simply visit our website. Our prices are frozen at 2019 prices so there’s no change there. We’ve introduced some new measures including our Socially Distanced performances on Mondays to ensure everyone feels as comfortable coming to the theatre as they can.

We can’t wait to open our doors for this incredible season and hope to see you there!