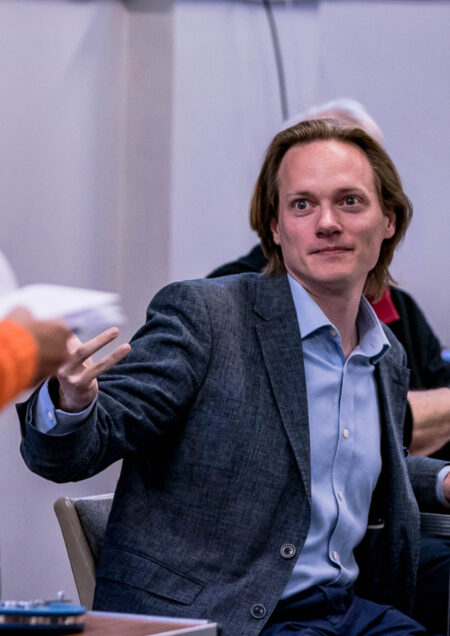 Tom Littler says: “My five years at JST have been challenging, fulfilling and deeply enjoyable. From Tonight at 8.30 to 15 Heroines, from Beckett to Brenton to Shakespeare, I’ve tried to create work which will entertain audiences, move them, and ignite their imagination

and curiosity. I’m hugely grateful to the staff, freelancers, supporters, and audiences who have made everything possible. But I’m pleased to be leaving it on a strong creative and organisational footing.”

The final production of Tom’s tenure, Dorothy L. Sayers’ Love All, will be his seventeenth at the theatre and his twelfth as Artistic Director. He will also announce programming for Spring 2023 before his departure.

In his five year tenure Tom has transformed Jermyn Street Theatre into the world-class producing theatre it is today. On joining in 2017, he changed the business model by turning our 70 seat studio theatre from a receiving house into a full-time producing house. He has collected a bevy of awards for the theatre including the 2022 OffWestEnd Award for Best Artistic Director, the 2021 Stage Award for Fringe Theatre of the Year, and most recently a Critics’ Circle Award. But his biggest legacy will be the relationships he has forged with creatives and theatres across the UK, Europe and New York.

Under his leadership, JST has become a crucible of multigenerational talent where you can see household names such as Helena Bonham Carter and Olivia Colman starring alongside emerging creatives and recent graduates. He has grown the organisation from a tiny group of volunteers and part-time staff to a full team of seven staff, with a Creative Associate programme which after just one year boasts alumni including Somebody Jones and Hannah Kumari.

“Since artistic director Tom Littler took over in 2017, the theatre has maintained its approach of presenting classic work on a small scale, as well as keeping hold of its loyal audience, while also forging forward with ambitious commitments to diversity, to in-house producing and to providing development opportunities for early-career practitioners of all kinds” – The Stage Awards 2021

Penny Horner (Co Founder/Trustee) says: “On behalf of the Board and my Co-Founder, Howard Jameson. It has been an honour and a joy working alongside Tom for the last half-a-decade. We are incredibly grateful for all his hard work in shaping Jermyn Street Theatre to become the organisation it is today. JST has gone from strength to strength these past few years, thanks to his brilliant leadership. He has steadfastly helmed our little ship that could, through the uncertain waters of the past two years – emerging not only afloat, but in the strongest position we have ever been both creatively and organisationally. We are, of course delighted for Tom on his new appointment and wish him all the best in his new role!”