Alan Ayckbourn’s Relatively Speaking follows the confusing intertwining of two couples as a series of misunderstandings leads a young man, Greg, to believe that Philip and Sheila are his girlfriend’s parents. But, Philip is not Ginny’s father at all, resulting in a hilarious high comedy that is considered to be among Ayckbourn’s finest work. The witty dialogue and frustratingly accurate depictions of marriage and first love have ensured that the play has not only endured the test of time but also launched the careers of some of theatre’s most beloved actors.

Originally produced under the title of Meet My Father, the play had its world premiere at The Library Theatre in Scarborough in 1965 and moved to the Duke of York’s Theatre two years later. With critics singing Ayckbourn’s praises, the playwright finally secured his first West End hit after his previous show, Mr Whatnot, hadn’t performed as well as expected and closed after only two weeks despite the beloved comedian, Ronnie Barker, leading the cast. Relatively Speaking was a triumph and ran for almost a year in London with over 350 performances. 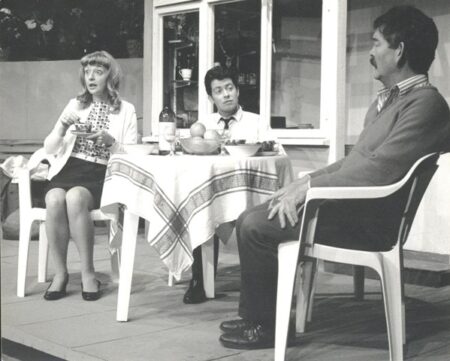 The stellar cast included the rising television star, Richard Briers, and secured his future success when he played Tom Good in BBC’s The Good Life and became a household name. Alongside him, Celia Johnson played Sheila, taking on the role only a few years before she won the BAFTA Award for Best Actress in a Supporting Role as Miss Mackay in The Prime of Miss Jean Brodie (1969). The play’s producer, Peter Bridge, pushed for Hugh Williams, renowned as a major film star of 1930s British cinema, to play Philip. But, failing to encourage Williams’ involvement, Michael Hordern stepped in. Best known for his Shakespearean roles, his career after Relatively Speaking incorporated more appearances on television and Hordern was knighted in 1983 for his contributions as an actor. The cast was completed with Jennifer Hilary as Ginny after her success in Sir Michael Redgrave’s production of Turgenev‘s A Month in the Country.

Early in its run, Noël Coward saw the show, sending his congratulations to Ayckbourn as he emphasised the beautiful construction and brilliant comedy. Believing the telegram to be a cruel joke, Ayckbourn actually threw the note away. But, soon enough, a call from Richard Briers, who had conversed with Coward after the performance, led him to retrieve the piece of paper from the rubbish, proving his overnight success.

Such good fortune continued when Relatively Speaking became the first of Ayckbourn’s plays to be shown on television. The BBC broadcasted a 50 minute excerpt of the West End production in 1967 and later presented a full length adaptation for their Play of the Month in 1969.

In 1970, the play opened in America with Joan Fontaine, celebrated for her starring roles in Hitchcock films, playing Sheila. Plus, the success of Relatively Speaking on the West End led to Ayckbourn’s popularity in Germany and 51 productions had occurred in the country by 1974.

The play continues to be consistently revived today as both professionals and amateurs are drawn to the hilarity and charm of Ayckbourn’s plot. In 2013, a revival at Wyndham’s Theatre starring Felicity Kendal was the first West End production since the play’s opening. Well-received, it highlighted how Ayckbourn’s popularity still persists. But, this success is not exclusive to the UK. A run of the production delighted audiences around the globe as Relatively Speaking travelled to countries including Singapore, Kuala Lumpur and Sri Lanka.

To find out for yourself why Ayckbourn’s comedy is so beloved, make sure you book tickets to #JSTRelativelySpeaking.

« An Interview with Rita KalnejaisComing Soon… The Encounters Season »